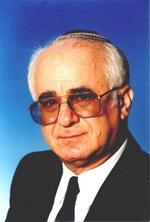 Yom Tov Assis, a leading scholar on the history of medieval Sephardi Jewry, passed away on June 16, 2013. A professor of medieval Jewish history at the Hebrew University of Jerusalem, he headed "Hispania Judaica", the Center for the History and Culture of the Jews in Spain and Portugal, and he served as the head of the university's Dinur Center for Research in Jewish History in 1994-97. Yom Tov Assis has left a legacy of numerous books and articles that have become indispensable for scholars in his field, among them the monographs The Golden Age of Aragonese Jewry (London: The Littman Library, 1997) and Jewish Economy in the Medieval Crown of Aragon, 1213-1327 (Leiden: Brill, 1997). Yom Tov Assis was the editor of the academic journal Hispania Judaica Bulletin, the series Sources for the History of the Jews in Spain and Hispania Judaica; he also directed dozens of collective volumes and source editions. A native of Aleppo, Syria, he was the chairman of the Center for the History and Culture of the Jews of Aleppo and its Surroundings and the chairman of The Ben-Zvi Institute for the Study of the Jewish Communities in the East. Professor Assis lectured in more than 40 countries. Among others, he served as visiting professor at University College London, the Sorbonne, UCLA, Yale, the University of Sydney, Anáhuac University in Mexico, Shandong University in China, and at CEU.